Dr Kelly Walton from Monash Biomedicine Discovery Institute, works with a team of scientists to develop innovative growth factor technologies that are aimed at improving female reproductive health. Her team recently developed a growth factor technology, termed Super-GDF9, that has proven to enhance oocyte quality and embryo production in the mouse. This exciting data led to industry investment in her project, and Super-GDF9 is now being validated in human oocyte fertilisation experiments. Simultaneously, her team has uncovered new evidence to support that blocking the actions of the ovarian hormones the ‘inhibins’, is an attractive means to enhance ovulation rates in females. Her unique class of growth factor technologies are attractive agents for increasing pregnancy success rates in women experiencing sub- or infertility.

The ability of female mammals to produce developmentally competent eggs (oocytes) is under the stringent control of ovarian hormones. Several of these ovarian hormones, including growth and differentiation factor 9 (GDF9), bone morphogenetic protein 15 (BMP15), inhibin A and inhibin B belong to the transforming growth factor -β (TGF-β) superfamily. GDF9 and BMP15 are made within developing oocytes in the ovary, and act to support oocyte developmental competence – the ability of the oocyte to produce healthy embryos. Inhibin A and inhibin B are also made within the ovary, but work in an endocrine manner to constrain the pituitary production of follicle stimulating hormone (FSH). Because FSH acts as a gatekeeper of ovulation rates, inhibin A/B indirectly control the numbers of oocytes ovulated. Additional evidence supports that inhibin A and inhibin B may have activities outside the reproductive axis, and even serve as guardians of bone health in women. The ability of these TGF-β proteins to control female reproductive function makes them attractive targets for improving fertility and overall physiological health in women.

Dr Walton’s group at the Growth Factor Therapeutics Laboratory leads the world in the development of TGF-β therapeutics. Recently, her team engineered inhibin A/B and GDF9 to increase biological activity between 30-1000-fold. The goals of this project were to (1) demonstrate in preclinical studies (mouse models), that Super-GDF9 could improve the quality and developmental competence of in vitro matured (IVM) oocytes, and (2) that Super-inhibin could reverse the post-menopausal related loss of bone (osteoporosis) and muscle (sarcopenia) mass.

In this study Dr Walton’s team set out to demonstrate that their Super-GDF9 therapeutic could enhance oocyte maturation and developmental competence in mouse models of IVM. In a series of studies, it was proven that Super-GDF9 markedly improved oocyte quality during IVM, as measured by (i) upregulation of genetic markers of oocyte quality (Stocker et al. 2020, JBC, 295(23):7981), and (ii) increased formation of mouse early embryos (blastocysts) (Fig 1). Excitingly, Super-GDF9 has been patented and has recently attracted industry investment from an international reproductive medicine company. It is currently being tested in human IVM cultures. Super-GDF9 is an attractive supplement for improving oocyte developmental competence for women undergoing fertility interventions. 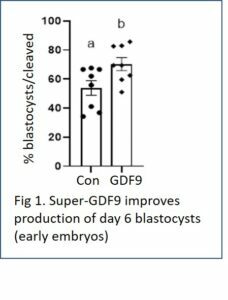 In this study, Dr Walton’s team first set-out to improve the manufacturability of inhibin A and inhibin B forms for preclinical studies. Using targeted mutagenesis, her team discovered the methodology to improve the yield and purity of inhibin A/B (Goney et al. 2020, Endocrinology, 161(8):epub). This is a game changer for the inhibin biology field, and will greatly advance efforts toward understanding the physiological activities of inhibin A/B. Though initially this study aimed to then test the ability of inhibin A/B therapeutics to promote bone and muscle growth in mice, the project direction changed in light of new findings in an inhibin-deficient mouse. Her team generated the first accurate mouse model of inhibin loss of function, and proved that these mice do not experience a bone or muscle insult when inhibin A/B are withdrawn (unpublished). This implies that inhibin A/B at least at a physiological level, are unlikely to have protective roles in bone and muscle health in females, and as such, her team has diverted their efforts towards other applications for inhibin technologies. Further analyses of inhibin deficient female mice revealed that partial loss of inhibin A/B function leads to enhanced fertility in female mice (doubling in litter sizes, unpublished). As such, Dr Walton’s current research efforts are directed towards developing anti-inhibin technologies for improving fertility treatments in humans.